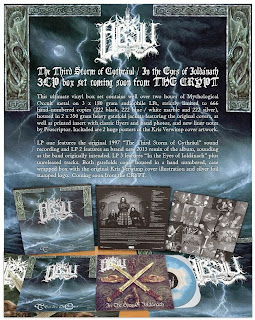 Texas occult metal legends once again join forces with the Crypt to unleash their third masterpiece "The Third Storm of Cythraul" + In the Eyes of Ioldánach". A wealth of unreleased bonus material is included for this 3LP. Expect the usual Crypt standards for this classic gem of Mystical Occult Metal.

This ultimate edition contains well over two hours of Mythological Occult metal on 3 x 180 gram heavy vinyl LPs, strictly limited to a one time only pressing of 666 hand-numbered copies - 222 of which will be black vinyl. These killer slabs of wax come housed in 2 x 350 gram semi-gloss gatefold jackets featuring the both of the original Osmose cover and layout, as well as a 2 sided insert with classic flyers, exclusive band photos, classic interviews and new, extensive liner notes by Proscriptor. Each gatefold will contain a huge poster of each respective original Kris Verwimp cover artwork.

LP one will feature the original 1997 sound recording. LP 2 will feature an brand new 2013 remix of the album sounding as the band originally intended and LP 3 will feature In the Eyes of Ioldánach + unreleased tracks.

We apologize for the steep price tag but unfortunately due to the deluxe packaging including the box, 2 full color posters, and royalties due to both band and label for this release, we were forced to raise it slightly more than usual. Rest assured that this monster box set is well worth every penny.