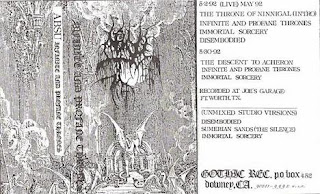 I feel quite privileged that I was given the opportunity to review this album from Equitant. He warned me over and over that this was awful sounding and nothing more than a relic from the end of the first era of Absu. Meaning that this is before Shaftiel and Equitant adopted their pseudonyms and just prior to Proscriptor McGovern, Daviel Athron Mysticia and Black Massith joining the band.

There seems to be a legendary / aura of mystery on this album since it was so limited when originally released and fans have asked for represses, especially now that "Return of the Ancients" and "Temples of Offal" have been made available again in many formats. So why not this one?

To start off, this is not a demo, but an "official" live bootleg, containing six live songs, very poorly recorded. While the drums and vocals are fairly audible, the guitars and bass are nothing more than background noise. They are slightly more audible when there are no vocals but it still sounds awful (although, I've heard worse from Immortal and Emperor bootlegs that were more readily available back in the late 90s). They perform tracks from the Temples of Offal EP and we get early versions of "Descent to Acheron" (which sounds somewhat close to the finished product on Barathrum: V.I.T.R.I.O.L. minus keyboards and female vocals) and "Infinite and Profane Thrones" (which sounds nothing like the finished product on Barathrum: V.I.T.R.I.O.L.). This might be the only interesting factor to this live bootleg as we hear two songs in their infancy before they became what they are now.

In addition to these live tracks, we also have three tacked on tracks - unmixed versions of the tracks from "The Temples of Offal" EP. In this case, they sound rougher, obviously, and missing some of their added effects but more or less the same as the EP.

Overall, there is nothing really great here - maybe the fact you hear the early versions of two songs that ended up on the first album but that's it. There is nothing here worth owning as you get much more from "Return of the Ancients" and "Temples of Offal." And, obviously, quite a bit more going forward from there. This is nothing more than a very weak finale of the very early first era of ABSU.

Addendum: There will be no re-pressings or re-issues for this release.