Chaos NZ Promotions will host ABSU on January 18, 2012 with support from Exordium Mors, Heresiarch and Nullifier at the Kings Arms Tavern in Auckland, New Zealand on the continuing Connexus Conjouration Tour 2012. In addition, ABSU will perform at the Inferno Festival in April, although the exact date hasn't been specified yet.

ABSU will be performing at Maryland Death Fest X in Baltimore, MD in May of 2012. 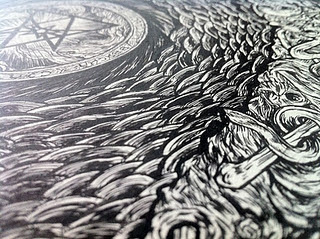 ABSU and Infernal Stronghold will release a split one sided 7" flexi that was pressed exclusively for their upcoming joint East Coast tour later this week. This release features one new song from each band, and is pressed on clear vinyl with four different colored silk-screened covers (red, blue, silver, gold) featuring artwork by NYC artist Dilek Baykara. This release is limited to 250 hand numbered copies and will ONLY be available at these shows - nowhere else!