ABSU will perform at the "Chaos In Tejas" event at the Red 7 in Austin, Texas on June 2, 2012 with Black Witchery, Morbosidad, Ares Kingdom and Loss.
Posted by Pete at 11:55 AM 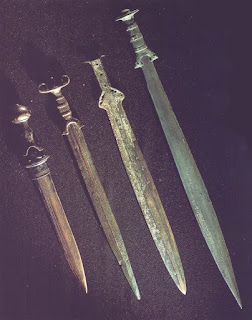 The intended cover of the "Hallstattian Swords" 7" EP

In 2000, Absu announced that they would release the "Hallstattian Swords" 7" EP to compliment the release of "Tara".  The 7" would be released by Blood Fire Death Records (ran by Lord Imperial of Krieg fame). It was never ultimately released. The track list was:

I. The Thrice Is Greatest To Ninnigal (Live)

III. The Great Battle Moving From Ideal To Actual