After long demand, full album MP3s are available for purchase - see the "Audio / Visual" page on the official site. 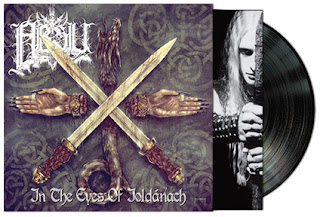 Texas occult metal legends once again join forces with the Crypt to unleash their 1998 masterpiece "In the Eyes of Ioldánach" plus the bonus tracks that were featured in the original 2014 "The Third Storm of Cythraul" 3 LP box set, this time presented as an affordable single LP.

This killer slab of wax comes housed in 350 gram semi-gloss jacket, featuring the the original original Kris Verwimp cover illustration and layout as well as a 2 sided printed insert with lyrics and band photos. Side one features the original 1998 EP, and side 2 features the bonus track "The Gold Torques of Ulaid" as well as 4 live soundboard tracks. All tracks have been meticulously mastered for vinyl from the original DAT tape for optimum sound.

LPs will be on classic black, deep purple or bone colored wax limited to 500 total.

Never Blow Out the Eastern Candle

The Gold Torques Of Uláid

Fantasizing To The Third Of The Pagan Vision / ...Of Celtic Fire, We Are Born... (Live)

The Gold Torques Of Uláid (Live)