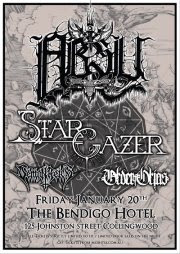 Friday, January 20th, 2012 - The Bendigo Hotel, 125 Johnson St., Collingwood, AU. ABSU will be a special guest with Stargazer, Demonreich and Order of Orias. 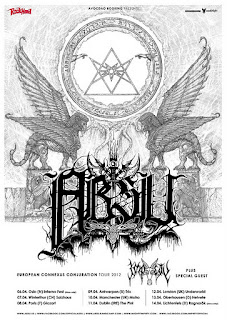 Aftermath Magazine has posted a new interview with Proscriptor. You can check that out here.

Also, ABSU will participate in the Meet & Greet in Sydney before their performance that day (Friday, January 13th). Additional information regarding this event is available here.
Posted by Pete at 12:02 PM

The January 12th Tour Date Location has changed to The Jubilee Hotel (Downstairs Room) in Brisbane.
Posted by Pete at 2:31 PM

Proscriptor McGovern is proud to announce the upcoming release of The Sun of Tiphareth vinyl box set via The Crypt in mid 2012.

This commemorative collector’s edition will feature the classic 1995 stereo mix, an unreleased new stereo mix by J.T. Longoria & Proscriptor, live/rehearsal tracks and the 'And Shineth Unto The Cold Cometh' EP. This will be strictly limited to 500 copies only.

The package will contain:

Vinyl box sets for 'The Third Storm of Cythrául' and 'Tara' will follow.
Posted by Pete at 8:14 AM