Multiple live videos from ABSU, several of which have never been seen before by the public, are available for viewing here.
Posted by Pete at 12:11 PM

Some Additional US Tour Dates Added for 2014 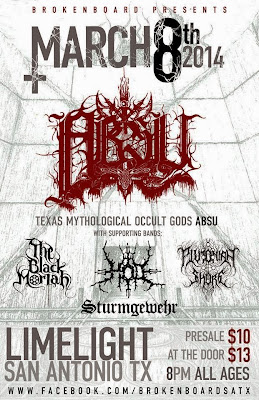 With the release of the "Third Storm of Cythraul" 3LP Box Set, the liner notes speak of the "Thrashstorms" EP, an album that has reached legendary status in the ABSU legacy.  Did they record those songs?  Does it exist?  Will they ever be released?  Here is that story:

In 1996, ABSU began to rehearse several cover songs, intending to release an EP called the "Thrashstorms". Some of the songs were recorded and later released elsewhere but the rest of the tracks remained incomplete. Proscriptor had told Osmose Records on what they had planned to do and Osmose put it int heir newsletter. With the annoucement, Relapse Records famously put in their catalog before even knowing if the EP had been pressed.

The following bands were going to be covered on the EP:

TRACK NOTES:
+ "Thrashstorms" was an original track by the band, later reworked into "Hallstatt". The band did eventually record "Thrashstorms" in 2007 for the "Speed N' Spikes Vol. II &" EP.
* "Bestial Invasion" (Destruction) in rehearsal format was featured on Mythological Occult Metal: 1991-2001 album.
** "Ravenous Medicine" (Voivod) was originally going to be featured on a Voivod Tribute album to be released by Relapse Records, but fell through. The track remains unreleased.
*** "Swing of the Axe" (Possessed) was featured on three different releases: 1. Mythological Occult Metal: 1991-2001 (Osmose Productions/The End) 2005; 2. Seven Gates Of Horror: A Tribute To Possessed (Karmageddon Media/Candlelight Records USA) 2004 and 3. V/A: Thrashing Holocaust (Necropolis Records) 1999
**** "Transylvania" (Iron Maiden) was featured on 1. A Call To Irons - A Tribute To Iron Maiden (Dwell Ministries) 1998 and 2. Mythological Occult Metal: 1991-2001 (Osmose Productions/The End) 2005
***** Originally, the band wanted to cover "Carnage" for this EP. They later were given the opportunity to cover a Mayhem song for the "Originators of Northern Darkness" tribute album but Behemoth had already selected it. The band chose "Deathcrush" instead also decided to include the infamous intro "Silvester Anfang" as well.
As noted, the rest of the songs noted above remain unreleased due to the fact that they were never completed and/or were only rehearsal tracks.  There are no plans to ever release them.  In its place, the band recorded the "In The Eyes of Ioldanach" EP and released that in 1998.

Here are some additional informational bits from various interviews way back in the day.

CoC: Well, I'm bummed to hear that Thrashstorms won't be coming out, because those are cool choices for songs to cover.

Proscriptor: We've been playing them since well before Absu was formed.  There were bands before Absu like Karrion and Karnage - both spelled with a 'K'... wonder why. Like Kreator. We've been playing the songs since '88; it's in our blood, which is why we planned the mini-CD. But, on the other hand, I told Herve the plan, but I never set any release date - then he puts it in a newsletter for Osmose. Then I look in a Relapse catalog, and they claim that they're carrying the Thrashstorms mini-CD.  It's never even initially been pressed. So I called up Relapse and fucked with them: 'Yeah, I'll take forty copies.'  These people fucking kill me.

MTA: What's the deal with 'Thrashstorms?' There was some confusion about its release date between Osmose and Relapse?

Proscriptor:  We never released it because too many bands are covering too much thrash material, as well as contributing to tribute albums. It's over: however, if there was ever to be an ABSU box set to be unleashed 10-15 years from now, I would highly consider putting the "Thrashstorms" mini-disque on it. Relapse made an immense mistake by printing it in their catalog when it was initially never released.