Pillars of Mercy
Morbid Scream
Never Blow Out The Eastern Candle
Stone of Destiny (with Proscriptor on Vocals Only)
Posted by Pete at 2:50 PM

ABSU Performs "Stone of Destiny" Live For The First Time in Brooklyn, NY

During the show, Grzesiek Czapla aka Gunslut from Woe/ex-Infernal Stronghold played drums during ABSU's first live performance of "Stone of Destiny" [not "Tara (Recapitulation)" as the article notes] while Proscriptor took on sole vocal duties.  Proscriptor previously did a live lead vocal only performance for with Zemial during the song "Sleeping Under Tartarus" in 2011.

Songs featured in the video below:

(In case the video above won't play for you, here is an alternative). 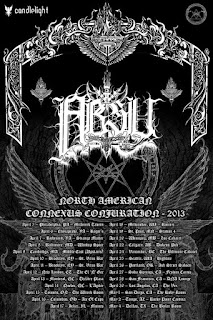