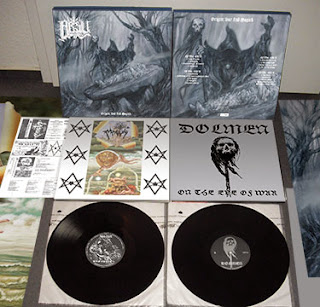 Every great story has a prologue. Before the mighty ABSU, there were two occult metal manifestations... MAGUS and DOLMEN that together, helped to forge one of the the most well know acts in the underground today.

The Crypt is proud to present our further cooperation with ABSU members Proscriptor and Equitant, with deluxe 12" gatefold vinyl editions of MAGUS - Ruminations of Debauchery and DOLMEN - On the Eve of War. Both releases will feature original cover art and layout elements. DOLMEN features the unreleased, original1989 mono mix (the 2001 Vinyl release features an artificial stereo mix as the tracks were only ever recorded in mono) as well as an unreleased cover of Slayer's "Black Magic". Magus will feature the original unreleased mix of "Ruminations..." as well as the 1992 "Lines That Formed Hexagrams" demo. All songs mastered for vinyl from the original analog and dat sources.

LP One – Side A: MAGUS – Ruminations Of Debauchery – Original Mix – 1992
Icons Of Gods
Debauchery
Ruminations (...Of Nature)
The Magus


LP Two: Side A & B: DOLMEN – On The Eve of War – Original Mono Mix – 1989
Conjuration (Intro)
The Ritual Night
Dolmen (Living In Fear)
On The Eve of War
The Battle
Denigration
Infernal Attack
Thy Summoning (Outro)
Black Magic (Slayer Cover)


Layout By The Crypt – All Tracks Mastered for Vinyl By Dan Lowndes @ Resonance Sound 2014.


Here is an excellent performance clip of ABSU at Maryland Deathfest X performing "Never Blow Out The Eastern Candle", which has its origins with Dolmen.